Update From The Flat That Time Forgot

Earlier this year, I foolishly made a number of public resolutions. By my reckoning, I’ve achieved seven out of the twelve, and made at least tentative steps towards the remaining five. I’ll let you decide which ones they are, but will tell you this much: the reason I haven’t blogged for so long is that I moved house and started full-time work. These activities turned out to be unreasonably time-consuming.

I suppose the biggest change is the move. In a slight amendment to resolution six, I finally deprived my parents of the joy of having their adult children mooching around their home and retirement by moving out of their house and into my aunt’s. (Baby steps.) The aforementioned aunt, having retired to Newquay, uses her flat in London only occasionally. It is to her flamboyant and potentially ill-conceived generosity that I owe my newfound independence and the happy fact that I now live in an extremely swish part of town for mates’ rates.

My new neighbourhood is so posh as to be slightly embarrassing. The flat is one of six in a imposing columned townhouse, itself one of 70 or so arranged around a a perfectly darling set of private gardens in the Gloucester Road area. Immediate neighbours include a minor member of the German aristocracy, an ambassador, and several Russian oligarchs (probably); even the foxes, like Jamie Oliver schoolchildren, are sleek and well-behaved, rooting elegantly from exclusively organic bins.

I still can’t believe that this is where I live.

When Kate helped to move in some of my stuff, she surveyed the area with interest. ‘All your neighbours are probably millionaires, you know’, she pointed out with her usual perspicacity.

‘She’s a millionaire’, she whispered loudly as a woman at the head of an armada of spaniels sashayed past.

‘He’s a millionaire too’, she ventured lustily as a floppy-haired Hugh Grant-alike opened his front door and stepped into a bright new day of entitlement.

The front door to my own building opened and a couple emerged with their children. (‘Millionaires’, Kate breathed conspiratorially.) The man wore chinos and a striped shirt, a sweater draped casually about his shoulders. His wife wore cream jodhpurs, a knotted scarf and a fur gilet. Her two daughters, aged approximately seven and four, wore identical gilets and scarves. I was suddenly very aware of my own accessories, breast-shaped smudges of dust on an old black hoodie.

The four-year-old started up with a plaintive ‘Mummy, why -‘ and her sister told her to shut up. In French. I introduced myself and explained that I would be moving into the first floor flat belonging to my aunt. ‘Yes’, the mother said, with unmistakeable wistfulness.

Kate had wandered off while I was conducting this valuable social transaction and now returned bearing a large ginger cat. ‘This is Charlie’, she informed me. ‘He’s a millionaire too. And he told me that he likes Porsches’. I was confused until Kate showed me the soft-top sports car a few doors down, the roof of which was covered with ginger cat hair. Charlie purred happily in Kate’s arms. Was it my imagination, or did he radiate a more than average air of pampered feline smugness? ‘Millionaire cat,’ crooned Kate lovingly.

Subsequent encounters with my neighbours have been even less chummy, though Charlie remains as approachable as ever. I’m convinced that the former think I lower the tone of the area, even though I’ve stopped hanging my washing out on the balcony and have asked friends to consider dressing up when they swing by. It is, of course, possible that the naybz have glimpsed the inside of my flat. Given the standards of opulence to which I’m fairly sure their own apartments adhere, this could go some way towards explaining their disapproval.

The décor of my pad is – well, retro. Vintage. Steeped in tradition. It has, let us say, a pedigree. And 1972 was a fine year. Kitsch is definitely ‘in’, but in this case I’m pretty sure that the flat’s look isn’t so much the result of a conscious design choice as my aunt buying things to last and never, ever, throwing anything away. When I first moved in, it was to discover a fridge older than me that made actual gobbling sounds as it sucked up power. It did come with a very interesting manual, though, which I studied carefully for the safety diagram: 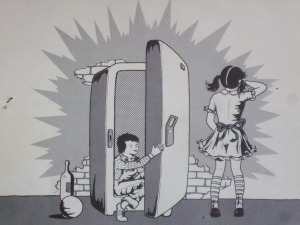 Sadly, this piece of electricity-guzzling, CFC-laden history had to be replaced, as did the washing machine that (in the event it could be persuaded to function at all) I had to stand in front of during the spin cycle to prevent it from rampaging across the kitchen.

Much of the flat’s interior dates from that very special era of design history when chocolate brown polyester velvet was seen as a desirable choice for all interior surfaces.

The open-plan kitchen-cum-living area is furnished with a brown sofa, brown dining table, brown sideboard, and a wide selection of brown chairs and occasional tables. The outrageously out-of-tune (but very exciting) piano is brown. The bookcases are brown. The plant-pots are brown. The lampshades are brown. The floor, mercifully, is cream, as are the walls. This colour scheme, though remarkably consistent, combines with the 70s fittings to give the impression of living inside an enormous portion of chocolate Angel Delight.

The colour scheme is affecting my inner life in increasingly sinister ways. I’ve been to two weddings this year wearing a chocolate brown dress with cream polka dots, with matching brown shrug and shoes (‘like a sweetcorn poo!’ says Gen, exultantly). I’ve started to use the sepia setting on my camera a lot more. And on Friday I served an entirely blameless group of people with a dinner party menu that was, in retrospect, almost entirely brown. We started with Traffic Light Soup™ (greenish-brown) and bread (brown). The main course was mushroom risotto (brown) served with courgette crisps (brown), balsamic reduction (brown) and rocket (a minor aberration in green). We finished with chocolate brownies (brown) and ice cream (white, brown specks).

Obviously – obvs! – I’ve made a few updates. With the consent of my long-suffering relation, the cupboards have been purged of out-of-date foodstuffs, broken kitchen implements, and the dessicated bodies of long-dead insects. My aunt also very kindly agreed to remove a selection of furniture and some of her more unusual ornaments to her house in Newquay. Then, after a lengthy consultation process, I acquired some retro brown and orange cushions and brought in an orange rug to update the living area. And the whole place is – well, cleaner. One of my less standoffish neighbours, Baroness S-, popped in for a cup of tea after I’d been living here a couple of weeks and expressed amazement at how tidy the flat was. ‘I’ve lived here 30 years, 20 of them as a neighbour to your aunt,’ she explained, ‘and I’ve never seen it so clean’. I received this news with no small amount of satisfaction. I’d been cleaning for 14 hours a day for ten days.

My aunt and I have more in common than just the Kenny teeth. We both sing, like red wine, and have a propensity to put on weight around the middle. We also enjoy entertaining, and view stealing from hotels and aeroplanes as perfectly acceptable in the greater context of the expenditure involved. Inevitably, though, we differ in a few key respects.

My aunt, an extravagantly tall individual, has enjoyed successful careers in business, law and local politics, while I’m stunted in terms of both height and ambition. My aunt views television as a noise that should always be present in the background as an accompaniment to any activity. I watch TV so rarely that when I do, I find it impossible to concentrate on anything else and have been known to stand, trancelike, in front of Merlin until power failure or the gag reflex release me. My aunt is a hoarder of ornaments, broken implements, and occasional tables, and has a distinctively laid-back approach to housework. I detest clutter and, since moving into her flat, I have started to display bona fide symptoms of obsessive compulsive disorder.

I’ve always been of a tidy bent where shared space is concerned, but contested the OCD label flung at me by grimy friends on the grounds that doing one’s washing up in a timely fashion shouldn’t be included in the diagnostic criteria for mental illness. But when my aunt has come to stay in recent weeks (it is her flat, after all), I’ve found myself following her around with a bottle of bleach and a  damp cloth. Having worked so hard, for so long, to restore the long-empty flat to some semblance of order, the urge to clean up after her in real-time is simply overwhelming. I try to bear in mind that my aunt and I have different outlooks on many things, including cleaning, and that not everyone shares the same high (read ‘correct’) standards of hygiene as myself. This doesn’t stop me from experiencing simple things, like her using my bath towel to mop up fat, or pouring coffee grounds over clean dishes in the designated ‘draining’ sink,  as acts of unmitigated aggression.

I’m exaggerating slightly. I love living with other people, and would almost certainly have chosen to if this opportunity hadn’t arisen. I’ve also done enough cohabiting to know that compromise, especially around issues of tidiness, is essential. But I think that now there will always be a part of me that would miss the luxury of being able to have everything exactly the way I like it.

This doesn’t mean I’ll give up on finding the perfect housemate. I still remember the raw emotion of the day I discovered that James – who I was planning to live with at the time – not only understood and agreed with my sentiments re: bathmats (i.e., they should be used and then, crucially, hung up to dry) but admitted that he actually dried his feet before stepping from the shower to minimise the soakage and subsequent drying time of the mat. The chances of finding another such man seem unlikely. 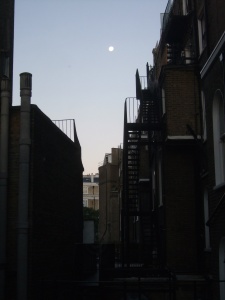 Christina Kenny is a music journalist based in London.
View all posts by Christina Kenny →
This entry was posted in Uncategorized and tagged 70s, brown, cushions, family, friends, growing up, money, moving, OCD, retro. Bookmark the permalink.

3 Responses to Update From The Flat That Time Forgot