If for whatever reason you HAVEN’T been desultorily trawling the web for updates on this story, discussing it on Google Chat with a wide circle of your acquaintance, or refreshing Twitter every four minutes to assess the public mood around the subject, here’s the situation.

Beyonce Knowles-Carter – internationally-acclaimed recording artist, live performer and all-round diva fabulosa – was down to sing the Star Spangled Banner at Monday’s US Presidential Inauguration, and some people are saying she lip-synced it. That is to say, she sang full-throttle into a mic that she knew to be switched off while a pre-recorded track was played through the speakers.

It hasn’t yet been confirmed whether this happened (or didn’t happen – whatever), but there are people out there who feel realllllllly strongly about it. 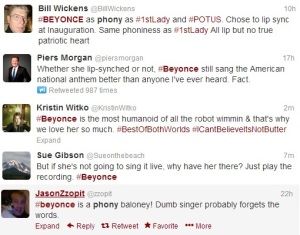 In all honesty, I’m finding the whole thing pretty hard to get worked up over. But since for two hours today I had cause to believe I might be interviewed about it by the BBC World Service and therefore wrote lots of notes, I’ll try.

I can see how some people might feel betrayed about the whole pretending-to-sing-live-but-actually-not-singing-live thing, especially since, if it wasn’t live, the powers that be appear to have tried their best to make it seem as though it was (at one point, she does a dramatic pulling out of her earpiece thing, as if so overcome by patriotism, emotion and the presence of Michelle Obama mere feet away, she no longer gives heed to tuning or The Man. There’s even the sound of wind on a mic).

Then there’s the fact that Beyonce is a professional singer, whose job is, technically, to be able to sing live to lots of people. So I can see how it might feel a little bit disappointing if you focus on that.

But am I surprised? Not really.

I don’t think many people appreciate how hard it is to sing when you’re being amplified. Those noises you make in the shower may sound great, but are not at all the same as singing into a microphone in front of a large group of people. Take it from someone who knows.

In November  I was lucky enough to sing with Voce live with the Rolling Stones at London’s O2 arena*. 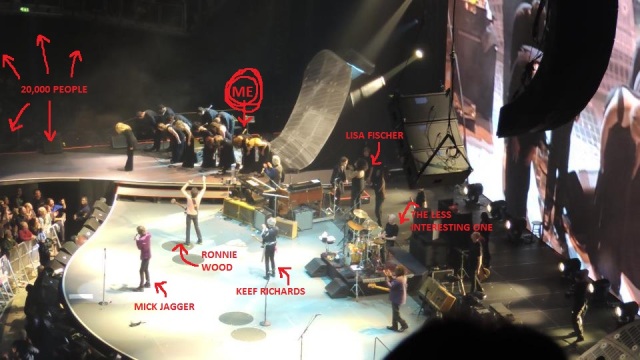 My experience with microphones before this: various choral recordings, and a Holst Singers / Imogen Heap project at the Roundhouse. The O2 was somewhat different.

At rehearsals and soundchecks we were miked, earpieced and given a stern lecture by a roadie on the vital importance of not talking, whispering, or making weird noises of any kind on stage. If we did any of these things, we were told, it would be picked up, amplified and transmitted to 20,000 people, all of whom would boo and throw things.

That’s all fine, but what we hadn’t anticipated was the fact that in the event we could not even hear ourselves over the noise of the crowd. I could have shouted obscenities into the mic (and it was touch and go for a while) and while the arena would have heard every word somewhere within that texture, I wouldn’t have. We just had to sing, trust our tuning, and hope for the best. Obviously, because Voce are amazing, it was fine. 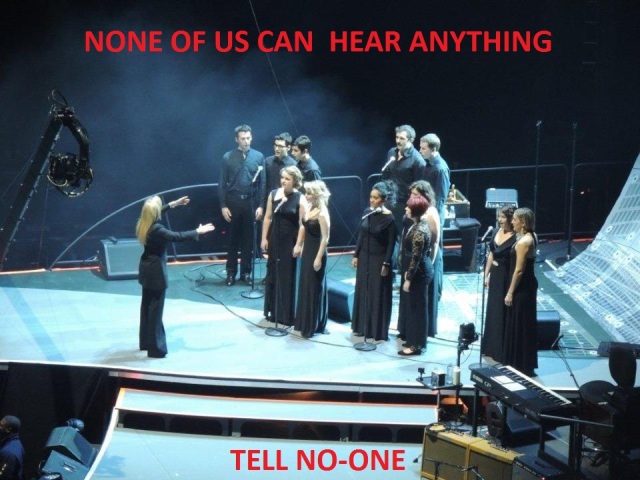 Now imagine it’s outside, with considerably more than 20,000 people screaming and singing along, and wind, and possibly other kinds of inclement weather, and highly assassinable people standing close by, that you haven’t had a rehearsal, and that if you fuck this up, people will be LOL FAILing you on YouTube for the rest of your short career.

Beyonce would be a fucking idiot if she didn’t lip-sync. To be honest, I’m surprised she didn’t just Skype in for that part of the ceremony.

When you think about it, the bigger story here is that if Beyonce was lip-syncing, then presumably an ENTIRE BRASS BAND was also lip-syncing. Is anyone giving THEM any grief?

PS. If any outraged readers want to enjoy some quality live music-making, they should come to one of my forthcoming concerts with the Holst Singers (2 March) and Voce Chamber Choir (17 March).  By lucky coincidence, both choirs will be performing the National Anthem, live, with ALL of the extra notes. 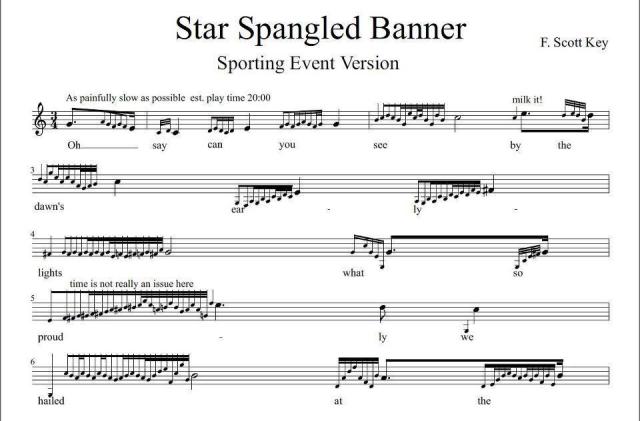 * Why yes, this whole post was a roundabout way of shoehorning this in.