An introduction to Sacred Harp

As regular readers will know, D for Dalrymple has long had its finger lodged firmly on the pulse of popular culture.

The Sacred Harp revival, therefore, is something that’s been on my radar for a while. I was first introduced to the concept by a friend, Ed Long, who explained that Sacred Harp was a form of devotional shapenote singing. Shapenote what now? I said, promised to attend his group, and then forgot all about it.

Then a few months ago, Voce programmed the very beautiful Down To The River To Pray as the ‘fun’ item at our summer concert. Researching the background of this tune got me into Appalachian Gospel, which led to Sacred Harp. I looked it up on YouTube. My first response was: What the fuck is this?

Loud, unrestrained, almost raucous, Sacred Harp was – is – a style of singing unlike anything I’d ever heard before in my classical background. More intriguing still was the format – a cappella religious songs in four-part harmony that aren’t performed in church or, indeed, anywhere. Instead the songs are sung by groups at special meetings called, in a pleasingly Wickerman kind of way, ‘Singings’.

– Be ye coming to the Singing this weekend, father?

– Naw, lad. There’s the lambing ter be done, hay to be rusticated and the sukebind coddled afore midnight.

This information bounced around my head uselessly until last Monday, when I was tweeted by a Sacred Harp enthusiast promoting a beginner’s session at a church in Bloomsbury. I had planned to go for a run after work, but this was as good an excuse as any to get out of it.

When I arrived at St George’s Church, Bloomsbury (late, natch) I was given a heavy red book called The Sacred Harp and took a seat on the alto bench. At Sacred Harp Singings, singers are arranged in four sections that face inwards to the centre. The leader beats time and gives cues from a spot in the middle facing the tenors who, unusually, carry the tune in Sacred Harp. To his or her right are the basses, and continuing clockwise, the altos and trebles. 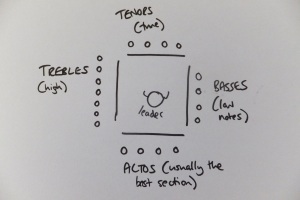 The group of around 15 singers had just struck up a familiar tune, Amazing Grace, which in this book was called New Britain. Once I’d found my note (a little bit tricky, because we weren’t singing at pitch), sightreading the music was easy, but something wasn’t quite right. The notes looked kind of funny. I squinted closer:

Confusing. There were some unfamiliar shapes on the stave – and the people around me didn’t seem to be singing the words that were printed on the page. Instead, they were doing some weird chant thing. ‘Oh far, so far me, oh me, far me so tiddle so so.’

I looked up and made eye contact with two women on the front bench of the tenor section who clearly were also new to this and, like me, were beginning to fear that they had inadvertently joined a cult. But the leader anticipated our confusion. Sacred Harp music, he explained, uses a method of musical notation called shapenote. The singers weren’t chanting, they were singing the names of the notes once through before they tried the words.

But of course, you’ve already heard of this. No, really, you have. Seen The Sound Of Music? The song Do-Re-Mi sees Maria teaching the von Trapp children to sing the notes of the scale using a system called solfah – or if you want to be posh, solfège.

Sacred Harp uses a simplified form of solfah. Instead of seven different syllables (do-re-mi-fa-so-la-ti), it uses only four: fa, sol, la and mi. There are still seven notes in the scale, though, so fa, sol and la get repeated*.

What’s the point? Well, I’m hardly an expert, but one advantage is that this system allows each note of the scale to be referred to by a name independent of its actual pitch. This comes in particularly handy if you don’t have perfect pitch (also known as the ability to know exactly what a note is without needing to play it on your iPhone first). You can simply pluck any note out of the air and call it Fa.

This may sound confusing, but trust me, it makes sense. It removes the need to fiddle about with key signatures and iPhones, but most importantly, it opens musical participation up to everyone, regardless of training. MUSIC FOR ALL YAY WHOOP WHOOP!

It is, however, a complete nightmare if you do have perfect pitch and aren’t allowed to decide what fa is.

At first I was completely incapable of linking the note shapes to their appropriate syllables and fell back on normal sight-reading to get by. But I soon found that, since every song started with the group reading the harmonies through with syllables, not singing them made me look like a dick. After 45 minutes of cheekily indiscriminate fa-la-las, I finally clocked that a triangle meant ‘fa’ and was soon daringly adding sols, las, and the occasional mi to my repertoire.

Towards the end of the session, something shifted. Shapenote ceased to be difficult and started to be helpful. While my sight-reading is generally pretty good, I have been known to have a slight blind spot when it comes to descending intervals – especially descending fourths. Yet this interval (which features regularly in Sacred Harp harmonies) simply wasn’t presenting a problem. Shapenote was actively helping me read music better.

I was impressed to discover that the American woman to my left was on holiday in London and had looked up the group so that she could drop in. This struck me as rather wonderful – like a Catholic from deepest Africa dropping into the Vatican to participate in a familiar Mass. I’m not sure this lady was attending for religious reasons, though of course there is an inescapable religious element to Sacred Harp. The lyrics are deeply puritan in style and outlook (we definitely covered ‘vile sinners’ in more than one song) yet they were the only religious element of the evening. On the whole, the singers seemed to be united by a shared joy of singing rather than by religious fervour.

I managed to record two songs on my phone, which I stuck on a handbag near the leader. The first song is a good example of the way shapenote lets you skip around different keys – at 0.35 the leader decides he has pitched the group too low and moves everything up a semitone for the first verse.

At 1.40, I’m asked to pick a song and, because I don’t know any, pick one at random. Number 343 (bottom) turns out to be very fast with lots of moving parts. Because it’s a song which not many of the people in attendance have sung before, the leader elects, unusually, to sing it through twice for notes before embarking on the words. I apologise profusely.

Nevertheless, by the time we get to the first run through with the words, most of the singers have got the hang of it. By the end of the second verse, the notes are there with a few extras lobbed in for good luck**. It was astonishing: a group of singers of mixed experience who had never seen the music before were able to rehearse twice and perform a song in four part harmony in the space of 95 seconds. I’ve done the odd paid gig where that hasn’t been possible. If that doesn’t show the power of shapenote, I’m not sure what does.

At the end of the session I found I could hardly speak, let alone sing. We had bellowed our way through 30 or 40 songs, and any technique that I’d brought to the table had been entirely discarded by nine o’ clock. I decided that my singing teacher should receive only a very heavily edited account of the evening.

In the pub afterwards, I had the opportunity to find out a little about the Sacred Harpists themselves. The singers in the group seemed to come from a variety of backgrounds. Michael Walker, the leader and Chairman of the 2012 U.K. Sacred Harp Convention, told me that in addition to leading international Sacred Harp Singings, he was a church organist. Another singer, Sam Carter, was an award-winning folk musician whose latest album, The No Testament, had just been released*. He handed out signed copies to some of the singers who had performed on the opening track of the album, Antioch. I discovered that Sam, Michael and some other members of the group had contributed to a Radio 4 documentary on Sacred Harp, also featuring Cerys Matthews and due for release in October: QUITE the celebrity gathering.

The group that evening seemed to be fairly evenly split between people in their twenties and those in their forties and fifties. Some had travelled quite some distance to attend and told me about the All Day Singings that occur from time to time up and down the country. It seemed on the whole that most of the older crowd had been singing Sacred Harp for many years, while the younger generation were coasting the recent revival.

Duane, a Filipino photographer and the person who had alerted me to the Singing via Twitter, turned out to be an enthusiastic convert and told me all about the flourishing YouTube Sacred Harp community***. When he passed around his new copy of The Sacred Harp for the group to sign, a young Canadian singer whipped out an iPhone to translate a comment written in Polish. It’s a deeply modern revival.

It was strange, but deeply heartening to witness a musical tradition that took hold in the southern US in the nineteenth century now experiencing a revival in Bloomsbury on a Monday evening. My thanks go out to everyone in the group for making me welcome and to Michael in particular for teaching me about shapenote.

If you’re interested in learning more about Sacred Harp, I’d recommend any number of mini-documentaries currently making the rounds on YouTube. Or perhaps you could join me at my next Singing?

* Yes, there are two fas, two sols, two las and one mi. I just wrote 400 words on why this is, but deleted them because I realised a) I don’t actually know b) I don’t really care, and c) it was DRY. Go and read about it on Wikipedia.

** Yeah, guy singing the treble line an octave down – I’m talking to YOU. High five!

*** There are Sacred Harp YouTube celebs. For real. Duane can introduce you.

14 Responses to An introduction to Sacred Harp