HAIRROW! and welcome to the second installment of the D for Dalrymple Questionhair results.

This post will look at how OFTEN you said you removed hair from your face and body, the METHODS you used, and how much it COST to achieve your hairless ends. This is, if you like, the practical part of the Questionhair (as far as anything relating to D for Dalrymple can be deemed practical) and to this end contains some whizzy hi-tech screengrabs and statistics. But not pie charts. Not yet.

One of the reasons for doing the Questionhair in the first place – apart from my simmering rage and all-consuming urge to humiliate myself for the benefit of strangers – was the realisation of how effectively I seemed to have normalised hair removal. Several hair removal practices (I like to say ‘practices’ because makes the whole thing sound vaguely arcane, like WITCHCRAFT or something) had effectively become an unconscious part of my daily routine, despite the inevitable implications for my time, finances and nerve endings, which I suspected to be considerable.

Working it all out took a while. Tallies were involved. It was a bit like being a long-standing addict working out the full extent of their problem – except instead of marking a chart every time I topped up a teacup with vodka, I was mentally noting how often my hands strayed towards the tweezers. It was a LOT. It still IS a lot: I’ve just done some brief recalculations and worked out that I’ve already had at least two tweezering sessions TODAY. It is not yet noon.

I’m not sure whether this says more about my general OCD-flavoured narcissism or my actual hair status. After all, it’s not like I’m pulling out imaginary hairs. But it does seem that every time I look in the mirror or catch sight of a body part unexpectedly (this happens) I notice something new. A tiny mole on my chin, gently glinting in the moonlight. The obscene suggestion of hobbit-like big toe stubble. And most frustratingly of all, an improbably long, single hair, curling luxuriantly from the centre of my brow. How does it GET so long, so quickly? Does it wait, invisibly coiled beneath the surface, before breaking through with the force of an ejector seat? Or has it been there for days, blowing frowsily in the breeze like a third eye on a hairy stalk, frightening the children? It’s hard to tell. But once noticed, it’s inconceivable that I should do anything other than remove it. Fast.

I wanted to know how often YOU get busy with the tweezers. 587 of the women* who completed the Questionhair were kind enough to answer this question, and here’s what they said: 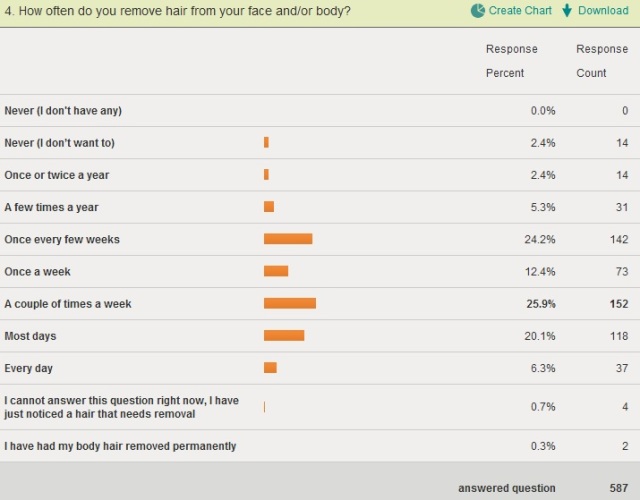 Ha! I’m so not alone. Just over a quarter of you, like me, tend to remove hair ‘most days’, ‘every day’, or were impeded in their ability to answer the question by an urgent compulsion to remove more hair. A further quarter said they removed hair a couple of times per week. That’s over half of us removing hair at least twice a week. It’s as reassuring as it is terrifying as it is unexpected.

In my warped pre-Questionhair imaginings, I’d anticipated that ‘normal’ people would be much more organised than me and would set aside a regular slot (probably a Sunday afternoon) for hair removal. I was consequently surprised by the relatively small proportion of women (just over 10%) who said they restricted themselves to weekly grooming sessions. The results suggest that women are much more likely either  to remove hair frequently on an ad hoc basis, or not at all: nearly a quarter of the women surveyed didn’t remove hair more than once every few weeks, and the rest either just dabbled (perhaps for special occasions) or didn’tbother full stop.

No-one said that they didn’t remove hair because there was none to remove. NO-ONE. Not even the two people who said they’d had hair removed permanently. Hair 1, women 0.

I asked you to tick boxes to show which methods you’d used to remove, reduce or disguise hair over the past year. Personally, I’d used tweezers, professional waxing, home waxing, threading, depilatory cream, bleach, an epilator, sanding and nail scissors – and that was just in the past MONTH. In fact, the only non-lolworthy options on the list I hadn’t used at all were laser treatment, electrolysis and, unusually, shaving.

I remember very clearly the last time I used a razor on my legs. I was 15 years old and on holiday with my family. Quite why I was shaving my legs at all is anyone’s guess – my family certainly didn’t care. It was a skiing holiday, so my legs were unlikely to be on show (unless I got caught in the chairlift, like this guy). Plus, we were in FRANCE, the spiritual home of hairy legs. I should have known better.

The shower was in one of those narrow cubicles where you can either face the shower head or turn your back on it, but rotating between those positions is problematic if you are unfortunate enough to have, you know, a body. It was when I tried to do my ankle left-handed from a semi-crouching position that I hit the artery. I’d never SEEN so much blood: the state of the shower stall made the Bates Motel look like the site of a minor paper cut. My increasingly panicked cries for help and for toilet paper to stem the flow were totally ignored by my relatives guzzling gin in the next room. Anita said later ‘it sounded like you were just expostulating a bit’. Yes Anita, I was. This was because I’d JUST CUT MY FOOT OFF. Thanks for the support.

I never really bothered with shaving again – partly because of the trauma, partly because Germaine Greer said I didn’t have to, but mostly because shaving made my leg hair grow back coarser, jet black, and with three hairs per follicle.

A staggering 92.2% of you DO use a razor, though. It proved far and away the most common method of hair removal among respondents, followed closely by tweezering.  The results in full: 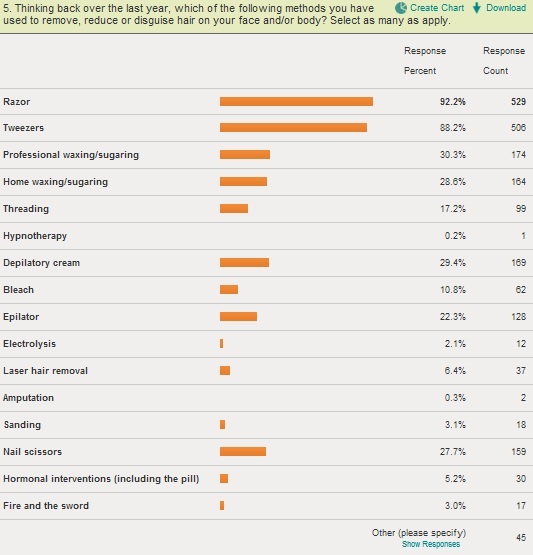 It’s reassuring to see those nail scissor stats, isn’t it? And those ‘others’. What else have you been using?

– 13 of you used electric shavers and / or your partners’beard trimmers to remove hair. Not all of you had permission. Cheeky.

– 11 of you owned up to using your fingernails and teeth to remove hairs – either because no other options were available, or perhaps just because you felt like it. No-one specified exactly where they were removing hair from with their teeth.

– four of you appealed to a higher power to remove hair, but gave no indication of this method’s effectiveness (please report back, if possible with full details of your chosen religion’s conversion procedures).

– three people said some quite freaky things. Like the woman who said she used a dragon. This is either a new hair removal device or a distinctly medieval response to body hair. Please clarify.

– two brave people said they used kitchen scissors to remove hair that wasn’t on their heads. D for Dalrymple cannot sanction this practice, or indeed any form of home surgery.

– two people used that hair-minimising moisturiser stuff. Both questioned its efficacy. I’m not surprised – if it actually worked, surely we’d all know about it by now?

Why is ‘none’ not an option? Please remove response ‘fire and the sword’ as it is merely to make the survey work.

None IS an option, arsey person: DON’T CLICK ANYTHING. Lots of other people managed to work this out. In the old days, people used to say ‘good morning’ in the street if they wanted a bit of human contact. Why not try this instead of HARSHING my MELLOW with your angry messages?

Is body hair a problem that you can get rid of by chucking money at, like Christmas? 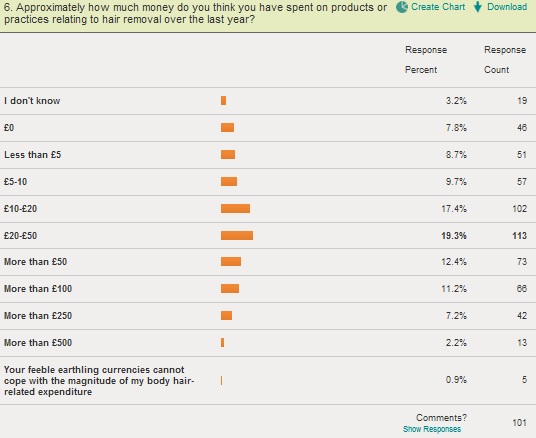 Whether we like it or not, the majority of us spent around £20-50 in the last year getting rid of hair, although people also spent radically more or less. That’s the equivalent of one to three bottles of mid-price gin. What does it go on?

One of the 113 people in the £20-50 bracket spent the money on incredibly cheap laser hair removal – presumably enough to zap one earlobe. 28 people used the money to get their twatmin done professionally, and the rest seem to have splurged their gin money on razors, home waxing, epilators, depilatory cream, and tweezers – hundreds of pairs of platinum-coated tweezers.

Is it worth it? Some of you seemed CROSS:

I don’t know how much I’ve spent. Far too much for my poor vulnerable bank account, I suspect.

It’s expensive, it takes ages out of my life, and the damn stuff always grows back It is NOT FAIR!

What about the big spenders? Of the 13 women who spent over £500 on hair removal, nine had invested in laser hair removal, two in electrolysis, and six in professional waxing. Yet nearly all of the same women were continuing to use not only tweezers (11 out of the 13) but razors (10 out of the 13) and in fact every single other hair removal option on the list, thus neatly dispelling the idea that expensive hair removal procedures remove the need to use all the other stuff.

Interestingly, of the women who said they’d spent nothing at all on body hair removal in the last year (and there were 46 of you who didn’t), only 13 actually chose not to remove their body hair at all. The remaining women all engaged in some form of hair removal from pretty much every body zone on the list, varying in frequency from ‘most days’ to once or twice a year. What’s this? FREE HAIR REMOVAL? Sorry. Only two of those people said that despite not spending anything, they’d somehow managed to wangle free professional waxing. The rest simply squeezed maximum use out of their tweezers, razors, epilators and depilatory cream.

And my, were you keen to pass on your money-saving hair removal tips. Quite a few people used the comments box to say that they’d invested in a really expensive epilator to bring down costs year on year. But then exactly the same number of women said they bought the cheapest razors available and saved money that way. A frankly distressing number of respondents said they borrowed or stole hair removal equipment from family, flatmates or significant others. You guys. You don’t really need me to tell you that this is unhygienic and potentially dangerous… do you? Jesus. They should open up a freaking razor exchange or something.

Were these the results you expected? How does your experience compare? And have YOU been horribly misquoted? Let me know in the comments section below.

Coming up next in this series of Questionhair results:  where is your hair? How does your hair compare? And how much do you share when it comes to hair?

The first 10 seconds of this clip from Hair. Watch them.

The D for Dalrymple Questionhair results – preamble and defence

* Just a reminder, folks, that for these initial analyses I’m filtering out responses from the 30 or so men who completed the Questionhair. All the information given in this post relates to the answers of those who identified as female-or-thereabouts.

Christina Kenny is a music journalist based in London.
View all posts by Christina Kenny →
This entry was posted in Questionhair and tagged chairlift/wardrobe malfunctions, d for dalrymple, hair removal, Questionhair, shaving, waxing. Bookmark the permalink.